Brassy caper on the shallow side 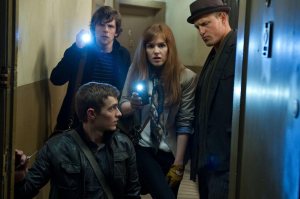 3SR: Now You See Me escapes mediocrity with some deft slight of hand and excellent misdirection by a stellar cast.

Now You See Me

***
America has had a love affair with illusionists, escape artists and magicians ever since Houdini first splashed out of New York’s East River in 1912, trailing  chains that couldn’t hold him.

Now You See Me, a brassy, flashy heist film with a twist, follows in Houdini’s foots steps, escaping mediocrity with some deft slight of hand and excellent misdirection by a stellar cast.

After being enigmatically summoned to a run down address, four good but unknown, magicians (Jesse Eisenberg, Woody Harrelson, Isla Fisher and Dave Franco), are given the plans for the ultimate magic stage show.

A year later  the rag tag gang are headlining at Las Vegas – a Mecca for cheesy magic shows fans –  as The Four Horsemen, with a show that defies not only understanding but international law too.

They rob a bank, live on stage, and end the show showering the audience with the million dollar contents of a French bank vault.

With the FBI  – lead by a determined if somewhat baffled Mark Ruffalo – now on their tails, can the Horsemen complete the plans laid out for them by their secret benefactor, or will the Feds outsmart the ultimate illusionists?

Harking back to the golden age of heist films like The Thomas Crown Affair and Oceans Eleven in style and tone, Letterier switches between following the deft exploits of the magicians and backfooted cops in a game of visual cat-and-mouse that mimics the action. But it happens so often  who we’re supposed to sympathise with is never very clear.

The Horsemen’s Robin Hood-esque antics, while probably not as altruistic as they at first seem are charming and topical – in one scene they clean out the back account of a 1 Per Center, siphoning his millions into the accounts of an audience made up of people who where fleeced by him in the economic downturn.

But it’s Ruffalo’s bumbling, earnest federal agent, desperate to get ahead of the arrogant magicians, that ultimately steals the show.

It’s not all clever illusions and slight of hand, though.  The last half of the film includes an action sequence that, apart from cementing Dave ‘‘brother of James’’ Franco’s abilities as an action hero for all time, is one of the most fun, novel and exciting I’ve seen since Joseph Gordon Levitt’s zero gravity fight in Inception.

Ultimately Now You See Me doesn’t stand up well next to magical classics like The Prestige, which had far more depth, but it’s a fun caper with a top cast – Michael Caine as the money man behind the shows and Morgan Freeman as a greedy magic debunker are always fun together – and great effects.
Here’s hoping the Four Horsemen ride again soon.