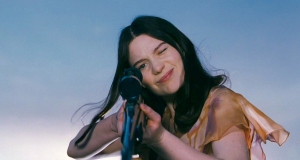 3SR: Icy cold coming of
age story about a young sociopath and the incestuous uncle who
loves her, but I expected more substance from the man who made
Oldboy.

An anaemic coming of age story
about incestuous sociopaths who find love and then stab it to
death, Stoker is not for the faint of heart
nor stomach.

But then what would you expect from a film
maker who’s best represented by the image of a claw hammer drenched
in blood?

Korean cinematic Maestro Chan-Wook Park’s
(Old Boy, Sympathy for Lady Vengeance) first
foray into English language filmmaking and Hollywood, Stoker, is a
much blunter instrument than he’s welded before, though. But
it showcases Park’s eye for the lush and macabre beautifully.

Isolated teen India’s (Mia Wasikowska) world has been
turned upside down by the sudden death of her beloved father the
arrival of a suave, intrusive uncle she never knew existed.

Uncle Charlie (played with chilling charm by Matthew
Goode) opens India’s eyes to adulthood, her sexuality and extreme
violence. But when she discovers Charlie’s creepy little
secret she must decide whether to follow in his footsteps or strike
out alone.
With
mommy and daddy issues coming out it’s beautifully shot ears,
Stoker is a psychological thriller in the purest sense.
Every scene is gloriously
composed to emphasise isolation, longing and a creeping sense of
dread as the twisted characters pick over their emotional demons
like buzzards over bones.
With multiple nods to Hitchcock – Uncle Charlie is a
direct reference to Shadow of a Doubt in which
a creepy uncle manipulates and threatens his niece – the motif of
little being what it seems echoes throughout the film, from the
idyllic opening imagery to the final brutal scenes.
India’s solitary life in the
house filled with stuffed birds – including her self obsessed
mother – is at once romantic and mundane, like ‘Bram Stoker on one
dose of laudanum too many.
Actual Dracula references are
muted, if there at all beyond the name of the film, but images of
predation, hunting and feeding abound suggesting India and her
Uncle are at least cut from the same black cloth as Stoker’s undead
villain.
Goode
really shines here, flipping easily from charming and debonair to
serpent-like menace to cracked vulnerability, while Kidman, as the
selfish, distant mother, hasn’t been this perfectly cast since
To Die For.
Wasikowska, too, seems die cast
for the role as a damaged young woman with a core of steel waking
up to her power in the world.

But the whole is
ultimately too cold to be truly compelling and India too closed off
to attach much care to, leaving Stoker little
more than a gorgeous exercise in mood making.