Much ado about Much Ado 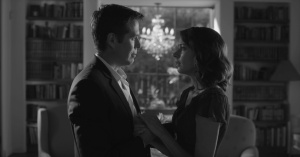 An absolute must for fans of the King Geek, Joss Whedon, this modern adaptation of Shakespeare’s comedy of deception, mistaken identities and gender politics is clever, stylish and above all fun.

Chock-a-block with favourite faces from some of Geekdom’s most beloved TV shows (Nathan Fillion, of Firefly and Serenity fame, is perfect as the self-important-yet-bumbling constable Dogberry) and films, Whedon’s stars make a mouthful of Shakespeare’s iambic pentameter sound as easy as watercooler gossip and banter.

When the governor of Messina (Clark Gregg) opens his home to returning military hero Don Pedro (Reed Diamond) and his entourage, including knights Benedick and Claudio (Alexsis Denisof and  Fran Kranz) he invites chaos, and romance, in with them.

In Don Pedro’s custody is his rebellious brother Don John ( Sean Maher) who determines to spoil everything when Claudio falls for the governors demur daughter, Hero (Jillian Morgese) and a marriage is arranged.

Meanwhile, confirmed bachelor Benedick verbally spars with the governors niece  Beatrice (Amy Acker), much to everyone’s amusement.  Wise to their battle of wits, the governor, Don Pedro and the smitten Claudio conspire to get the snarky pair together.

But being a comedy, and comic timing being Joss Whedon’s wheelhouse, love prevails in the end.

Shot while waiting for SFX to be completed on The Avengers, and springing from the regular Friday night Shakespere get-togethers Whedon hosts at his LA home, Much Ado About Nothing is the natural result of bundling a bunch of incredible talent together and tying it all up with a driving force for creative fun like Whedon.

Funny, endearing and crackling with very modern energy, Whedon’s take on the play walks the fine line between updating and paying homage to the Bard’s most popular comedy.

He fills in the spaces Shakespeare leaves on the page – his plays are almost devoid of stage direction – with comic antics so perfectly aligned with the text it’s hard not to imagine Bill had them in mind from the start.

And all of it serves to frame often difficult ye olde speake perfectly for a modern audience, in much the same way Baz Luhrmann’s radical updating of Rome + Juliet did in 1996.

But where Luhrmann’s eye for design took over the text and drowned it in locations and set dressing, Whedon’s simple black and white photography, shot on location in his own lovely home, puts the focus on the language and the performances making the film a really joyful experience, not to be missed.