Hippy – geek with a will of iron 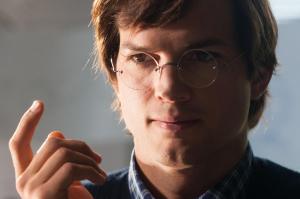 3SR: Jobs takes the Steve Jobs cult of personality to a new level. But there’s no denying, Jobs was kind of a jerk.

**
There’s no mistaking that, whatever his accolades, Steve Jobs was kind of a jerk.
Josh Stern’s pacey, evocative biopic, Jobs, does almost nothing to disguise the fact, and even attempts to make his jerkishness something of a virtue – the driving force behind his genius.
Opening with the now famous launch of the iPod – one of the most revolutionary gadgets of the last 20 years – Jobs sets out to tell a moving story of the guy who wanted to put your entire record collection in your pocket.
Beloved of his professors but disdainful of ‘‘The System’’, Jobs (Ashton Kutcher)  drops out of college to take acid and wonder around India, like every late 60s and early 70s hippy cliche that ever was. But when his nerd mate, Steve ‘‘Woz’’ Wosniak (Josh Gad) shows him his idea for connecting a television to his computer Jobs’ inner capitalist is awoken.
Riding the late 70s – early 80s tidal wave of  computer love, Woz and Jobs start Apple Computers and Jobs ups his jerkishness to epic proportions by dumping his pregnant girlfriend, refusing to acknowledge his daughter, turning his back on his friends and making his underlings at Apple cry.  A lot.
Despite this, and the fact he gets squeezed out of his own company for being insane, he still manages  to make computers cool and change Western Society for all time.
As I sit writing this review on an iPhone which is never more than two feet from my body, ever, it’s obvious that Jobs’ vision of computing and how we relate to our computers – he wanted them to be a ‘‘natural extension of the individual’’ – was an idea so radical and yet so necessary, it needed a single-minded jackass behind it to make it happen.
But that’s not much of a story to pin two hours of film on.  Jobs may have gotten the job done, but despite Kutcher’s angelic face, he’s is so unlikable it’s hard to care about his struggles to be understood.
Kutcher’s bouncing, forced emulation of  Jobs’ trademark gait and emphatic hand gestures are little more than a distraction too, looking more like a  Saturday Night Live impersonation than acting at times. It’s not all iPhone 5 levels of disappointment though.
The soundtrack, naturally, is killer, with hits from the 70s to the 90s underpinning the drama, and helping build a picture of the hippy-geek with a will of iron.
But the expensive cast and slick production does little to disguise the made-for-TV roots of this film.
I’m not sure its a fitting epitaph to the man whose vision drove such sweeping  social change.
But in the end, Jobs says exactly what the most revered creative entrepreneur of the 20th century would have wanted: He made cool stuff happen.  And there’s nothing jerkish about that.