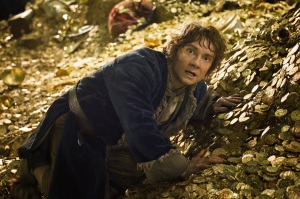 A rambunctious, rollicking, riotous return to mystical middle earth. A joy from go to whoa.

In folklore circles they say our centuries-long fascination with dragons stems from the time when our ape ancestors shared the earth with dinosaurs.

So mighty, terrifying and just plain awesome were those beasts our genes have not forgotten them and we carry a fascination for wyrms, wyverns and firedrakes with us to this day.

I’m sure that bone-marrow deep sense of wonder is the inspiration for the great dragon coiled and waiting in cinemas this week, because Smaug is exactly that: utterly awesome.

Silencing the nay-sayers and surpassing its predecessor in almost every way, The Hobbit: The Desolation of Smaug is a jaw dropping masterpiece, and a cracking good time to boot.

Kicking off with a flashback to wizard Gandalf (Ian McKellen) and head dwarf Thorin (Richard Armitage)  – at a certain inn fans of The Lord Of The Rings will remember – the pair meet in Bree to hatch their plan for returning the King Under the Mountain to his throne.

It’s the last time anyone in the film sits down.

After that we’re off at a riotous run as 13 dwarves and one little hobbit hare across middle earth with a gaggle of gruesome orcs hot on their trail.

As all the introductory work been done in the previous Hobbit film, there’s just fun, frights and a breakneck pace as each action set-piece unfolds into an even more stunning action set-piece.

Seriously, the barrel riding sequence alone has to be seen to be believed.

If anything, I wanted to slow down and look around a little. Especially as we’re introduced to new faces like werebear Beorn (Mikael Persbrandt),  imperious elf king Thranduil (Lee Pace),  heart-throb inducing Bard (Luke Evans)  and magnificent Tauriel (Evangeline Lilly) the elven ass-kicker.

But there isn’t the time, there’s too far still to go, and those danged orcs, seamlessly created with both computer graphics and truly masterful makeup, just will not quit.

It’s in this breakneck speed and mounting sense of danger that director Peter Jackson shows his deft hand with a story too.

When the company is separated from Gandalf and forced to leave a handful of the injured cohort in grubby Laketown, the three skeins of the tale remain clear and purposeful even as they’re effortlessly interwoven.

Gandalf’s mission even ties the Hobbit films to the Lord of the Rings trilogy with one neat bow, while the others stitch up what’s at stake in the final film.

What’s at stake, of course, is death by almighty Smaug – the dragon that nightmares are made of – who lies in wait for Bilbo (Martin Freeman) and his crew, buried in loot under the mountain.

It seems churlish to talk about Smaug in terms of computer generated images and the like because, coupled with Benedict Cumberbatch’s villainous voice work, Smaug is as real as any one else in the cast.

Cumberbatch’s mellifluous baritone, sly and arch, reminds me of Sher Kahn from the Jungle Book, alluring and terrifying by turns.

And Smaug’s serpentine body is delightfully sickening to watch, coiling and undulating as he herds tiny Bilbo across a scree-fall of gold coins.

He is an astounding feat of technological wizardry, but more than that, if the primal hairs at the back of your neck aren’t tingling when he turns his jaundiced eye on his prey then I guess you’re just a further along the evolutionary path than the rest of us.

Dear, pretty little cottage.
This old clock only rings when there’s an earthquake now.
The Japonica outside my Nana’s house is my favourite plant anywhere in the world.
Happy 50thbirthday, @thedowse. You are a jewel in Te Awakairangi’s cultural crown. 💖✨💖
Miss you, Nana.
My beautiful Nana, a true “pocket Venus”.
There was never a time when she didn’t know her own mind, fear sharing her opinion or have a plan or three up her sleeve. She was kind and gentle, rude and tough, quiet and one hell of a racket. She loved double happies, party poppers and making a scene. She loved embroidery and crochet, knitting and sewing, and everything she called “the womanly arts”. She was a wonderful story teller, and the first published writer in our family. She loved her bible and could quote chapter and verse. She never swore, unless it was for laughs.
Farewell, my darling Nana.
#dogsofinstagram