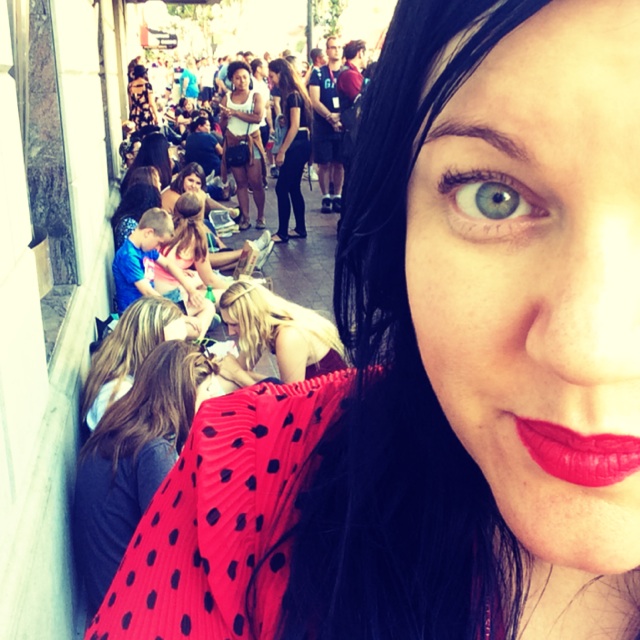 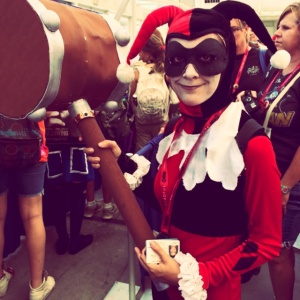 It’s hot here, so hot you’re sweating like you’ve been rained on. All day.  The outdoors is an inhospitable nightmare of sun, heat and more sun.

It’s not gonna stop the guy in the full Chewbacca  costume breakdancing on the corner of Fifth and Market in Downtown San Diego, though. Not this week, anyway.

This is my third year, and possibly the last I’ll get to come to for a while, so I’m trying to soak it all in with just my five ordinary senses, and not filter it through my sixth, artificial sense – my iPhone’s camera.

Previous years of consigning every moment to my brain’s external hard drive meant I saw this place through a variety of jewel-like filters, miniaturized and manageable thanks to my tiny screen.

This year, eyes wide, this shit’s just plain overwhelming.  And watching Chewie dance in full fur in 100 degrees is less about the thrill of getting that great Instagram moment than it is about being there to call the frikken paramedics when the idiot’s heart gives out.

Dead Chewie’s aside, I’m enjoying the convention more though, I think. I’ve actually seen more, and met more people sitting on the baking footpath in lines this time.

This is the most vital part of Comic Con, connecting with your fellow impassionata.

In the four hour long line for a screening of The Maze Runner, which stars one of the beautiful boys from Teen Wolf, I strike up fun conversations with the girls ahead and behind me in the line.

They’re young, and practically vibrate with youthful exuberance for Teen Wolf – the kind I feel a much more elderly and embarrassing version of myself (it’s a stupid show, but God, how I love it).

They analyze plot points, character flaws and strengths, special effects, emotion with the pin point accuracy and depth of the truly focused.

Not one second of that show has gotten past them. Every second has meaning.

I feel a little like that about the Con, too, acutely aware that I might not be back, might never be back, I’m trying to Hoover it all up, jamming in every experience I can from the giant chewy salt pretzels, to the never-ending lines.

Every second has meaning.

So far I’ve lined up for two movies and missed out on one (Into The Storm) by just five people.  I’ve been in two panels,   Community (brilliant, hilarious) and Teen Wolf (sigh) and about a trillion bars and restaurants.

I’ve seen things you wouldn’t believe and I already don’t want it to end.

Today there will be more panels – Fox, including Channing Tatum’s Book of Life panel in the afternoon, followed by an intimate 200 people Maze Runner affair at Nerd HQ, and maybe Sleepy Hollow, Cosplay and one on Fan Fiction at the convention centre.

But first there’s a phone to charge (just in case), the heat to brave and people to meet.