Fangs for the memories
(★★★★ Directed by Ana Lily Amirpour)
What do you get if you cross Persian sexual politics with 80s style, the French New Wave and classic vampire films?

An absolute masterpiece that shouldn’t work, but somehow does.

With acute comic book sensibilities and a fresh eye – unbelievably, this polished gem is Amirpour’s first film – Amirpour takes a fist full of cinematic cliches and rattles them up and rolls out and instant genre classic.

Despite his Fonzie-cool exterior, Arash is only barely keeping it together.  His father is a hopeless junky and his father’s pusher is breathing down his neck.

Also interested in necks is The Girl. Loneliness personified, she wanders the streets of the empty city seeing all and saying nothing in search of her prey – those who would prey on others.

When The Girl and Arash finally meet, it’s kismet –  two lost soul colliding, providing each other with not just a reason, but a means to finally escape Bad City.

But will the truth about The Girl’s last victim drive a stake into the still beating heart of their romance?

Speaking of hearts, she wears hers on her sleeve, does Amirpour.  As a first film, A Girl Walks Home Alone is clearly a love song to everything Amirpour thinks if cool in film – 80s tunes, high school romance, the crisp look of the New Wave, skateboards and electronica, swooping black wings of eye liner and wide mouths inky with blood.

Coupled with her long meandering shots in atmospheric black and white, and a sound track as mesmerizing as it is challenging, Amirpour’s style is all about style. 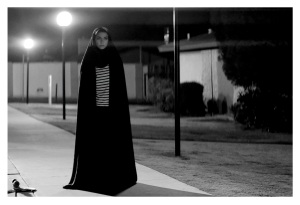 That focus might lead you to leave the film feeling like you want a little more from your visit to the fictional Bad City.

It’s true, key images are left entirely up to your interpretation – a gully full of dead bodies that no one seems to notice, a seemingly empty city still pumping out gas, The Girl’s old fashioned chador that doubles as a vampire cape, for example.

But there’s something alluring about the open-endedness of it all – the creeping discomfort of no easy answers.

Eternally lonely though she may be, The Girl’s vampire nature is as much a mystery in the final scene as she is in her first.  To me that seems like a precious thing in this cinematic age of exploring every nook and cranny of a story in endless prequels and sequels.

Haunting the streets of a lifeless industrial wasteland, she comes to represent the spectre of unfettered progress’s tussle with traditionalism, sucking up the last dregs of society until only the purest (or most handsome) are left.

Like her cinematic cousins Adam and Eve in Jim Jarmusch’s marvelous Only Lovers Left Alive (2014), and the ambiguous Eli in Tomas Alfredson’s deliciously creepy Let The Right One In (2008), Amirpour’s vampire is more than just a foil to hang some titillating scares on.

Ultimately, though, what makes A Girl Walks Home Alone an instant classic is not the meandering, unresolved tale.  It is in the mood and passion of Amirpour’s hip, classy vision that will keep you rooted to your seat, yearning for more as the final credits roll.