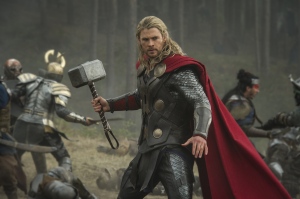 When you find yourself watching a Superhero-movie about a Norse God who smashes evil with his mighty mystical hammer wishing things would speed up a little it’s not a good omen. 

Thor: The Dark World, the latest instalment in Marvel’s multi-franchise spanning spandex fest, has been much anticipated by fans eager for more of the city destroying goodness we’ve come to expect from The Avengers (2012) and it’s feeder franchises, Iron Man and Captain America.

In Dark World, however, Thor is frustratingly slow to get off the ground, although the God of Thunder more than makes up for it with a pretty spectacular landing.

Busy putting the nine realms to rights after bother Loki’s (Tom Hiddleston) defection in The Avengers, Thor (Chris Hemsworth) hasn’t had a lot of time for romance.

But when an ancient evil is accidentally awakened by his savvy scientist love Jane Forster (Natalie Portman) as she searches for an explanation of an anomaly in deep space, he must return to Earth to help her.

Taking her home to Asgard doesn’t go down so well with dear old dad, Odin (Anthony Hopkins), and ends in tragedy for mother Friga (Renee Russo).

Now with all Asgard against them and the power Jane’s unleashed coveted by a race of thoroughly evil Dark Elves intent on returning the universe to a state of endless night, Jane and Thor must turn to the most unreliable ally  get them to the Dark World and a chance for salvation.

Game of Thrones director Alan Taylor chose to take Thor: The Dark World in a much darker direction that previous Thor helmer, Kenneth Branagh, but it still a space opera of the highest calibre.

With more than half of the film set on distant alien worlds amid an exotic alien culture so advanced their technology looks more like magic than science, Dark World is a grade A fantasy fest – gorgeous, rich with world building and replete with detail.

Despite this its first half flounders, needlessly weighted down with scene after scene of exposition and chatter, and a lot long shots of Thor moping about and looking pensive.

It’s completely unlike the first instalment of the Thor franchise, a charming fish-out-of-water tale, as big and brash and gorgeous as it’s affably powerful protagonist.

The contrast suggests Thor, God of Thunder and all round good sport, is really best seen in comparison to us mewling humans, where he stands out as a shining beacon of old world charm and strength.

The way Dark World drags when he’s not smashing stuff and running about looking all magnificent and charming is a clear example of why Odin’s son’s trip to the dark side a hiding to Nowheresville: population, Marvel.

(Whoever thought it was a good idea to smother Hemsworth’s thunderous physique in a big boring, grey poncho for half the film needs their head reading, too.)

If their turn in the Avengers proved anything it’s that, here on Earth, Thor and Loki, his not-so-nice but infinitely more interesting brother, are literally awesome. Anywhere else Thor’s a little bit run-of-the-mill heroic and naff, and Loki’s a little bit of a villainous caricature. Alone, they have nothing to play off.

In fact it’s hard to see the point of a film without these two together and it’s not until Loki makes an appearance in Dark World that the film really picks up speed and lives up to the hype.

Hemsworth and Hiddleston have snarking sibling banter down pat, and Loki’s unpredictability and moral ambiguity makes every twist and turn a thrilling surprise.

In fact Hiddleston steals practically every scene he’s in, even giving elder stateman Hopkins a good run for his money at one point, and wringing the most pathos out of the predictable set-ups.

The action here is also brilliant, with London’s Greenwich taking enough of a battering as Thor faces the evil Malekith (Christopher Eccleston hopelessly underutilised) to keep the most destructive chaos fan happy.

A somewhat staggered start to the ramp up to The Avengers 2 in 2015, but still lots of fun, I can only hope Thor:The Dark World doesn’t set the pace for the next two Marvel offerings, Captain American: Winter Soldier and Guardians of the Galaxy.

Stay for the mid-credits teaser and post credits adorableness.